The Hawa Mahal is located in Jaipur, the state capital of Rajasthan. This is a mansion-palace. Hawa Mahal was constructed by Maharaja Sawai Pratap Singh in 1798 and it was designed by architect Lal Chand Usta like a ‘Rajmukut’. It’s unique five-storey the building, which is only one and a half feet wide from the top, looks out from the beehive on the outside, in which there are 953 extremely beautiful and attractive small-latticed windows, called Jharokha. The basic feeling behind making these windows netting was that the women of Rajghar who strictly adhered to the “curtain custom” looked at the activities of the roads and the everyday life of the streets under the palace with these windows. Apart from this, due to the “Venturi effect”, the cold air, always with the walls of these complex structures, comes in the castle, due to which the palace always remains air conditioning in the hot summer.

Built on lime, red and pink sandstone, this palace is situated on the main road in the heart of the business center of Jaipur. It is part of the City Palace and the is spread to the janana room to the women’s room. In the morning, it gives a unique feeling to see the sunshine in the sunlight. 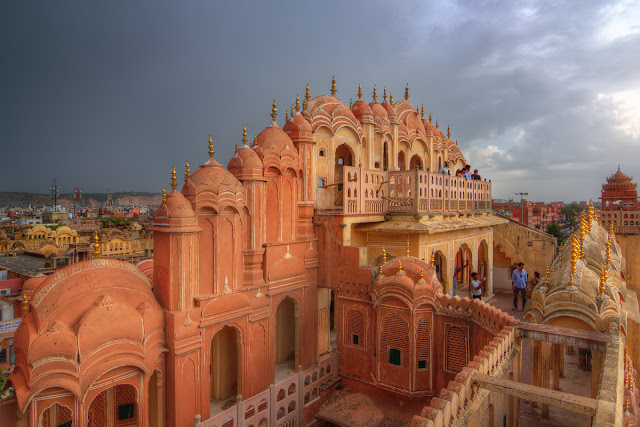 Hawa Mahal Mahal is a five-story monument, with a height of 50 feet (15 m) from its main base. The dimensions of the width of the top three floors of the palace are as much as a room, while the bottom two floors also have an open patio, which is in the rear of the palace. The front part of the palace, which is seen from the main road in front of the Hawa Mahal. On its small window, sandstone stones have extremely attractive and beautiful carvings, pendants and dome. This unmatched the structure boasts of several semi-octagonal windows in its own right,

Lal Chand Ustad was the architect of this unique building, which also helped in the preparation of Jaipur city’s crafts and architectural plans. Keeping in mind the decoration of other monuments in the city, the color of this palace made of red and pink colored stones is a complete proof of the title of ‘Gulabi Nagar’ given to Jaipur. The front part of the Hawa Mahal is decorated with 953 unique carved windows (some of which are also made of wood) and this is exactly the opposite from the previous part of the castle because of the back portion of the Hawa Mahal is quite simple. Its cultural and crafts heritage is a unique mixture of Hindu Rajput art and Mughal style, for example, the attractive work of flowers, dome, and giant pillars are unique examples of Rajput art, as well as on the stone The Mughal style carvings, beautiful arches, etc. are the notable examples of Mughal craft.

How To reach Hawa Mahal