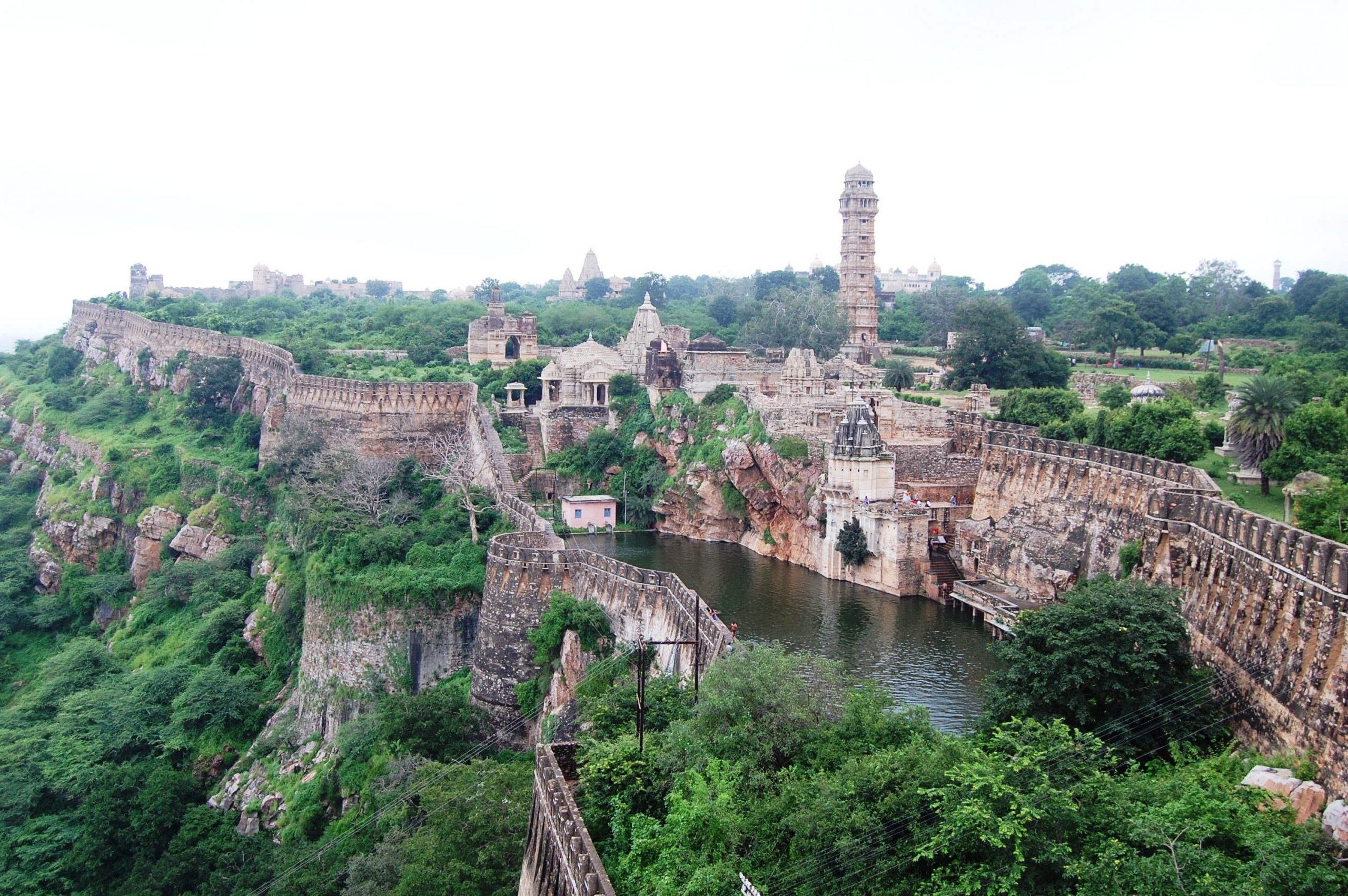 Chittorgarh Fort is the largest fort in India. It is located in Chittorgarh of Rajasthan. This is a World Heritage Site. Chittor was the capital of Mewar.

This the fort has seen the ups and downs of history. It is the witness of the most bloody battles in history. The fort of Chittor was declared a UNESCO World Heritage Site on June 21, 2013. Chittorgarh is also known as the pride of Rajasthan and the Sirimmoor of all the fort of Rajasthan.

In the 738 King Bappa Rawal defeated Manmori, the last ruler of the Mauryan dynasty who ruled over the Rajputana, took the fort under his control. Then, Parmar Raja Munj of Malva took it away from the Guhilavis and merged it with his kingdom. Thus, in the 9th-10th century, it was dominated by Parmaras.

In 1133, Solanki King Jaysingh of Gujarat defeated Yashovarman and took away Malwa from Parmaras, due to which the fort of Chittorgarh also came under the authority of Solanki. Later, defeating the successor of Jayasinghe’s nephew Ajaypal, Raja Samant Singh of Mewar re-established the Guhilavans around 1174. The marriage of Raja Samant Singh was done by Prithvi bai, sister of Prithviraj Chauhan. Samant Singh died in the Second Battle of Tarain. From 1213 to 1252, after destroying Nagda by Iltutmish, Chittoor was made the capital by King Jaitra Singh and ruled the chittor state.

In 1303, Raval Ratnasinh fought here with Alauddin Khilji. The battle became known as the first Shaka of Chittor. Allauddin Khilji was victorious in this battle and handed it over to his son Khijr Khan, Khizr Khan handed over the rule of Chittor to Kanheda’s brother Maldev.


Rana Hammi, the founder of the Sisodia dynasty (which is a branch of the Guhil dynasty), descended from Bappa Rawal, again captured this fort from Maldev. Hamir was very mighty and visionary. He ruled here for fifty years with great merit and expanded his kingdom. With the same efforts, the pride of Chittor could be restored. In 1538, the Bahadur Shah of Gujarat attacked Chittor. This war is known as the second Shaka of Chittorgarh fort.

In 1567, the third shaka of Mewar took place, in which Akbar had attacked Chittor. All these Muslim king attacks are one of the main reasons for the cultural destruction of Chittorgarh. After the third shakha, in 1559, Maharana Uday Singh removed from the capital of Mewar from Chittor and established it near the Pichola Lake in Aravali, which is today known as Udaipur.

This is the first entrance gate of the fort. It is said that once a river of blood was flowing during the fierce battle, it had come here a buffalo (Pada) flowing-flowing here. For this reason, this door is called Padan Pol.

The first gate of the chittor fort is the memorial of Rawat Baba Singh on the outside of the Paddy Poll. In the reign of Maharana Vikramaditya, in 1535, inspired by the disorder here, Sultan Bahadur Shah of Gujarat attacked Chittor. Due to being a child at that time, Hadi Rani Karmavati sent Vikramaditya and Uday Singh to Bundi and handed over the charge of protecting the fort to the Mewar chiefs. Rawat Bagh Singh of Pratapgarh, representing the state of Mewar, represented Maharana Vikramaditya and fought against this door and received Veergati. This monument has been built in memory of the same hero.

The second door, which is known as the Bhairav ​​Poll, is run on the slightest north side of the Pada Poll. It is named after the Solanki Bhairondas of Desuri, which was killed in the war in 1534 by Sultan Bahadur Shah of Gujarat. Maharana Fateh Singh Ji rebuilt it due to the breaking of the original door.

Jaimal and Kalla of Umbrellas

Near the Bhairav ​​Poll, there are two umbrellas on the right side. The first four pillars have a famous Rathore Kalla and the other, the six-columned umbrella is itself Jaimal, with whom both Rathods were killed. In 1567 when Emperor Akbar climbed Chittorgarh, at that time the two together wrecked the enemy army. In the end, Veergati received both different places. These umbrellas remind them of the glory figures.

Moving forward from the Hanuman pole to the south, Ganesh Pol comes, which is the fourth gate of the fort. Near it is the temple of Ganpati ji.

It is the fifth door of the fort and due to the sixth gate being very close, it is called Jodi Pole.

Near this sixth gate of the fort, there is a small temple of Lakshman ji, due to which its name is Laxman Pole.

As you move forward from Laxman Pole, you get a Western entrance gate, through which you can enter the fort. This door is the seventh and final entrance gate. Climbing after this door ends the climb. Near it is the Suryavanshi, the ancestor of the Maharanas, the temple of Lord Ramchandra ji. It temple is an outstanding symbol of Indian architecture or Hindu culture. After entering the door, there is a settlement towards the north road, and there are many tourist attractions of the fort with the route towards the south.

Once entering Rampol, it is about 50 steps away from the front of the monument to the monument of Sisodia Patta on the terrace. In 1568, the epistemological address of Aamer’s Rawat was fought by Akbar’s army and Veergati was received at this place. It is said that in the war land a mad elephant caught the warring leaf into the trunk and slammed it on the ground, causing him to die.

Near the Chaugan, the palace of Padmini, Raval Ratnasinh, on the banks of a lake remains. A small castle is made in the middle of the water, which is called Janana Mahal and the edge of the castle is called the Mardane Mahal. A large mirror in a room in the Merdana Mahal is felt like this that a clear reflection of any person standing on the stairs of the Janana Mahal, which is in the middle of the lake appears in the mirror, but not the person standing on the ladder after looking back. Can be seen. Probably Alauddin Khilji stood here and saw the image of Queen Padmini.

In the north of Padmini’s palaces, there is a beautiful, high-chair-walled temple of Kaliika Mata on the left. This temple was built probably by the Guhilavanshi kings of Mewar in the 9th century. Originally this temple was a Sun Temple. The proof of the statues of the sunset in the entrance of the sanctuary and the outer sides of the sanctum sanctorum. Later, during the invasion of Muslims, this statue was broken and the temple remained dry for years.

After that, the statue of Kalika was established in it. The task of digging the pillars, roofs and entrance doors of the temple is visible. Maharana Sajjan Singh had renovated this temple. Since Murthy’s reputation in this temple was done to Vaishak Shukla Ashtami, so a huge fair is held here every year.

Maharana Kumbha defeated Mahmud Shah Khaliji, the Sultan of Malwa, in 1440 AD, for the first time, in the memory of Ishtadev Vishnu, this memorial was built. Its reputation came in 1448 AD. This column remains light in the inner part of the structure due to its architecture and its inner floor. In it, various forms of Vishnu like Janardana, eternal etc.,

their incarnations and Brahma, Shiva, various deities, Ardhanarishwar (half of body Parvati and half of Shiva), Umameshwar, Lakshminarayan, Brahmasvittri, Harihar (Half Lord Vishnu and Hirdha ), Harihar patamah (Brahma, Vishnu and Mahesh all three in the same statue), but hundreds of statues of the characters of Ordnance (weapon), Dikpal and Ramayana and Mahabharata The Udi. His name is also inscribed above or below each statue. Thus, this building is an unusual tool for the analysis of various embellishments of ancient idols.

In some pictures, the geographical horror of the country has also been engraved. The panoramic view of the fort and adjoining areas is seen from the upper floor of the Kirti palm. Once the lightning struck, the umbrella was broken once, Maharana Swaroop Singh was repaired.

Maharana Kumbha constructed this magnificent temple of Vishnu’s Barah Avatar in 144 9 AD (V. 1505). Beautiful statues of this temple are the womb cell, the mandap and the pillars. The statues depicting various forms of Vishnu, the scenes of Nagar-style, the skyscraper summit and the contemporary Mewari style, are the specialities of this temple. Originally, the idol of Varahavtar was established here, but after the conversion of Murshid to Muslim invasions, the image of Kumbhswami was now installed.

are beautiful pictures of Shrikrishna. There is a small umbrella in front of the temple. Here is the footprint (pagalai) of Master of Mira Swami Raidas

These palaces built in the Thirteenth Century were renovated by Maharaja Kumbh, and these palaces are called Maharana Kumbh’s palace. The entrance doors are called the big pole and the Tripoliya. Even as the ruins, these palaces show the excellent architecture of Rajput style. Suraj Gorwada, Janana Mahal, Kawlada Mahal, Deewad-e-Mango and Shiva Temple are some notable parts of this palace.

It is believed that there is a basement in these palaces, in which a tunnel can go through the goom. Maharani Padmini had done this jewelry with thousands of veerangnao after bathing in the Gaumukh Kund, but there is no proof of such a tunnel here.

In this historic palace, the founder of Udaipur, Maharana Udai Singh was born, and in the same place, Swambhakta Panhandhai allowed his beloved son to be killed in the hands of Banavira for the protection of Uday Singh. Meerabai’s Krishna devotion and poisoning are also associated with this palace.

How to Reach Chittorgah Fort Rajasthan 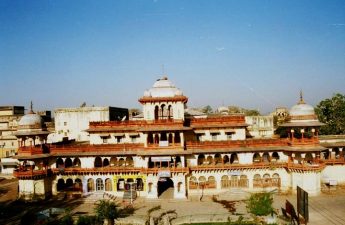 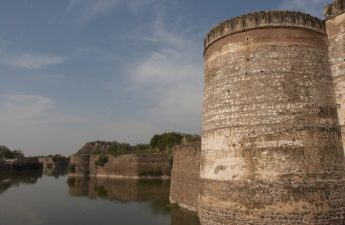 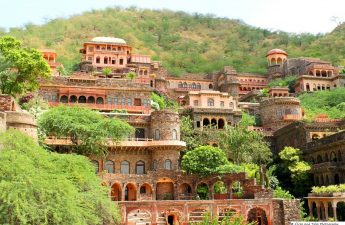