Located in Tonk district of Rajasthan, Sunhari Kothi is one of the major tourist destinations in Rajasthan and is also known as the Golden Mansion of Tonk. Sunhari Kothi is about 30 km from the Tonk district. The golden Kothi located in Tonk is prominent in the beautiful and refreshed Havelis of Rajasthan India. The golden Kothi situated in Tonk’s city of Tonk is so grand in appearance that it attracts tourists from far away.

The golden kothi looks like a common haveli from the outside but is decorated with grandeur on the inside. The walls of the golden Kothi are adorned with glasswork, floral paintings, and magnificent artifacts. Along with this, the gold polish has also been done on the walls.

The construction work of Sunhari Kothi began in 1824, Amir Khan, the Nawab of Tonk. And that’s was completed at the time of the fourth Nawab Ibrahim Ali Khan. It is said that when this Kothi was constructed, the price of gold was only 15 rupees and the wages were 15 paise. At that time 10 lakh rupees were spent on the construction of this Kothi. Persian and Rajput styles were used in the construction of this Kothi. On the roof and walls of this Kothi, the artistic flower of pink color has been painted and gold and glass were so finely decorated in it that it attracts the tourists coming here and the tourists are left in sight. The pillar of this Kothi is also very beautiful and artistic carving, which looks very beautiful to see.
The photo of Sunhari Kothi at the 34th Trade Fair 2014 held in New Delhi was a major attraction of Rajasthan Pavilion. However, due to development work on the exterior of Kothi, it has been closed for the last 10 years.

How to reach Sunehri Kothi tonk 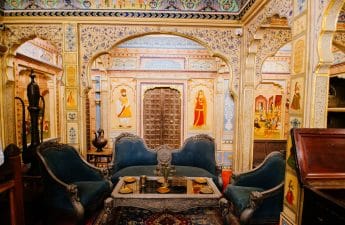